The Laura Joh Rowland Wiki is an open-resource catalogue for the works of Laura Joh Rowland. Anything from the characters of Sano Ichirō to the world of Charlotte Brontë to the life of Sarah Bain can be found here.

This wiki is in need of editors![]

Don't know where to start? Try browsing through these pages to get some ideas:
Article Stubs
Works in Progress

Thank you for stopping by.[]

The Way of the Traitor

The Pillow Book of Lady Wisteria

The Secret Adventures of Charlotte Brontë

The Woman in the Veil 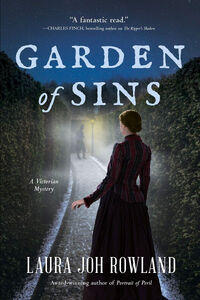 Garden of Sins is be the 26th novel written by Laura Joh Rowland and the sixth entry in the Sarah Bain series. It was released on January 11, 2022 by Crooked Lane Books.

London, November 1890. Crime scene photographer Sarah Bain Barrett faces a perfect storm of events. She and her husband Detective Sergeant Barrett are riding on a train that crashes. While rescuing other passengers, they find a woman who's been strangled to death. Their search for her identity and her killer lead them to Cremorne Gardens, a seedy riverside pleasure park that's a combination carnival, theater, freak show, and museum of oddities. It's among the most challenging cases that Sarah, Barrett, and her friends Lord Hugh Staunton and Mick O'Reilly have ever undertaken. The suspects include a dwarf, a female acrobat, and a member of the Royal Family. Due to the royal connection, the police commissioner declares the case top-secret. Sarah and company must investigate on the quiet, keeping the suspects, the press, and the public in the dark. That's easier said than done. The investigation is complicated by the injury Hugh sustained during their last case, Mick's romance with a woman who has psychic powers, and Barrett's old flame.

Meanwhile, Sarah's father Benjamin Bain goes on trial for a rape and murder that happened more than two decades ago. The victim was a teenage girl named Ellen Casey. Is Benjamin Bain as innocent as he claims? Sarah has serious doubts. The trial is the scandal of the year, a media blitz. The outcome--and the truth about the murder on the train--are beyond Sarah's wildest imaginings. What dangerous secrets are hidden behind the tawdry glamor of Cremorne Gardens? Is Benjamin Bain wrongly accused, or a guilty sinner who deserves to be hanged?